Star Wars: The Last Jedi releases on Blu-ray tomorrow! The Star Wars saga welcomes the return of original characters as well as new members. You’ll definitely want to add this movie to your at home collection. We’re also sharing The Last Jedi Printables including free activity sheets. Grab them below! Try your hand at Star Wars trivia and trivia crossword, plus fun coloring sheets for the kids! Click the image below to download these free Star Wars printables. In Lucasfilm’s Star Wars: The Last Jedi, the Skywalker saga continues as the heroes of The Force Awakens join the galactic legends in an epic adventure that unlocks age-old mysteries of the Force and shocking revelations of the past.

o   Lighting the Spark: Creating the Space Battle – Get a close-up look at the epic space battle, from the sounds that help propel the action, through the practical and visual effects, to the characters who bring it all to life.

o   Snoke and Mirrors – Motion capture and Star Wars collide as the filmmakers take us through the detailed process of creating the movie’s malevolent master villain.

o   Showdown on Crait – Break down everything that went into creating the stunning world seen in the movie’s final confrontation, including the interplay between real-word locations and visual effects, reimagining the walkers, designing the crystal foxes, and much more. 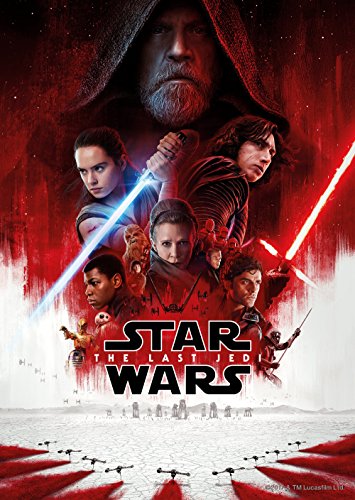 The Multiscreen Edition (formerly the Blu-ray Combo Pack) includes Blu-ray, and a Digital copy, giving viewers the flexibility to watch the film on different devices. Those with 4K Ultra HD capability may opt for a 4K UHD Collector’s Edition, including 4K Ultra HD disc with Dolby Vision and Dolby Atmos, Blu-ray disc, and a digital copy (where available). Dolby Vision delivers greater brightness and contrast, as well as a fuller palette of rich colors. Dolby Atmos places and moves audio anywhere in the room, including overhead. Together on 4K Ultra HD Blu-ray disc, viewers will practically feel the Force in their own home.

As long time fans of the Star Wars films, we were so excited to get a copy of Star Wars: The Last Jedi before it released on Blu-ray. We held a family movie night at our home and enjoyed watching the latest adventure-packed film. As the highest grossing movie in 2017 – this latest edition is not to be missed! Grab your copy today. And don’t forget to print your free Star Wars: The Last Jedi printables above!