I’m currently listening to Six the Musical soundtrack on my Amazon Alexa as I write my review. My husband joined me for last night’s opening performance of the Broadway show in Orlando at the gorgeous Dr. Phillips Center. I prefer to not watch videos of a performance prior to going so that I can be pleasantly surprised, and Six the Musical did not disappoint! When I say the audience was up on their feet singing, dancing, and clapping along – you know it was a good time! These queens know how to put on a show!!

From Tudor Queens to Pop Princesses, the SIX wives of Henry VIII take the mic to remix five hundred years of heartbreak into an exuberant celebration of 21st-century girl power! This new original musical is a global sensation that everyone is losing their head over.

This is no ordinary history lesson. Six the Musical is a full-on stunning vocal performance. 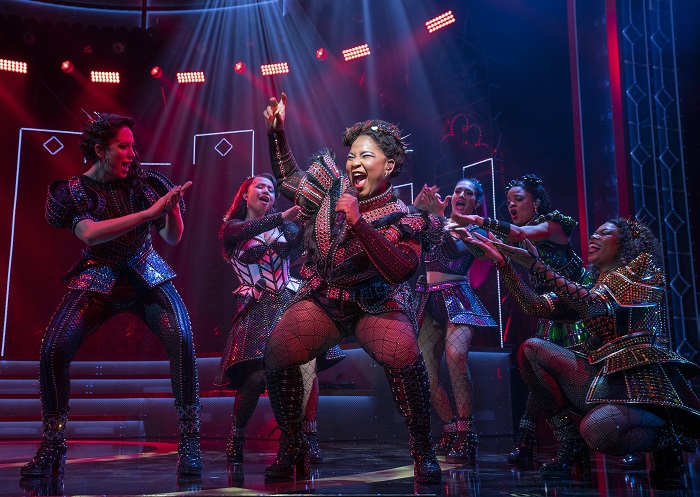 Who is your favorite Henry VIII Queen?

All of these ladies put on an incredible performance, but my vote (if I had to pick) would go to Jane Seymour…..I mean she is Henry’s one true love, right?! I loved Jasmine’s voice which is a Queenspiration mix of Adele and Sia. I’m not surprised I gravitated to her as my favorite considering I LOVE both of those artists. The other standout performance for me was Gabriela who played Queen Catherine Parr. Her voice was so angelic and pure. However, every lady sang like it was their last performance.

Don’t care for history? Don’t worry – Six is so much more than that!

*It’s important to note that I recommend the show for teens and up. While there’s no cursing (that I recall), there are some crude jokes and some sensitive topics like miscarriages.

Six the Musical is playing at the Dr. Phillips Center October 4-9, 2022

I highly recommend getting tickets. You do NOT want to miss this performance! The show is 80 minutes without an intermission. Get Six merchandise here.

If you’re not local to Orlando, check their site for the Broadway Tour.