Growing up in Orlando allowed me the unique opportunity to visit the Walt Disney World parks more often than out of town guests. That led to a deep love for all things Disney, especially the films! The Little Mermaid released in 1989 and became my all-time favorite Disney princess film to date. My dream came true a few years ago when Disney invited me to the west coast to cover the re-release of TLM, this time on Diamond Edition. Ever since, I’ve flown out a few times a year to cover other films, most recently for SOLO: A Star Wars Story, and A Wrinkle in Time. And during my last visit, I was invited for a special tour of Walt Disney’s office!

That smile on my face is masking all sorts of emotions. Yes – I’m happy, elated, and excited, but I’m also humbled, fascinated, and on the verge of crying while walking through Walt Disney’s personal office. Suite 3H is a very special place – and I didn’t want to leave! Here are some of the things you can find when touring his office. The office above was used by Walt’s secretary, Tommy. This room holds the display cabinet of awards Disney won, like the special Oscar for “Snow White and the Seven Dwarfs.” From there, you can pass through a door to Walt’s formal office where he hosted larger meetings. The office features original furniture, pictures of his daughters, a variety of collectibles and much more. The Knabe grand piano was purchased and customized for Walt by the studio’s designer, Kem Weber. Disney songwriter Richard Sherman often played Walt’s favorite song, “Feed the birds” from Mary Poppins. Walt never played. This set of bronzed baby shoes on Walt Disney’s desk reminded me of my own set my mom proudly displays in her living room at home.

From there you pass through another door to Walt’s working office where he did his day-to-day business affairs. Walt’s brother, Roy, was the company co-founder and often spent time there. Beside the desk were scrolls of current work Disney was working on, including preliminary plans for Disney World’s Epcot. I also noticed this certificate of merit for the production of “Fantasia,” along with several model airplanes, what appeared to be a record of Mary Poppins, a collection of scripts, a Rolodex, and a few old guns Disney collected. On the floor is a brown bag Disney used with the letters W.E.D imprinted on them.

Along the opposite wall was a huge aerial view of Disneyland and it’s current projects in 1966 like “It’s a Small World” and “New Tomorrowland.” Before departing the room, I spotted this brass Donald Duck to Walt from his brother, Roy. And then there was a surprise! A kitchen is hidden behind wood paneling that can be displayed at the touch of a button. Disney was especially fond of Spam and V-8 and often took cans with him while traveling. He was actually quite simple in those respects.

In between Walt’s office and private space was a closet that has since been turned into a display area for Walt Disney’s personal items including a railroad pass, necktie, Remington shaver, hat, and glasses, among other items. Finally, you can enter Walt Disney’s personal quarters where he would relax after a long day’s work. The archived space currently houses two walls full of caricature drawings of the icon from artists around the globe.

Thinking back to my amazing week in LA for the #solopremiere. I can’t wait to share details about visiting Walt Disney’s original office. Talk about a dream come true for this #disneyfan! . . . In the meantime, head to the blog for exclusive interviews with the cast of #soloastarwarsstory! #aldenehrenreich #hansoloevent #starwars #paulbettany #emiliaclarke #ronhoward #starwarsmovie #solo #hansolo #waltdisney #waltdisneystudios

As you circle back, you’ll find yourself in the hall that leads out to the entrance and exit doors. I wanted to loop through the offices again and see what I missed! It was such an amazing experience, and something I encourage anyone in the Burbank area to consider. It’s truly an honor to have walked the halls, and personal space of Walt Disney. In addition to visiting Walt Disney’s office, the studio held a Peter Pan themed scavenger hunt for us. The 25 bloggers were randomly split into groups of five. We were team Wendy! We trekked all over the studios’ lot with clues and completed tasks like locating hidden pixie dust, Captain Hook’s ring toss game, answering trivia questions, finding Peter Pan’s shadow and more! We had the BEST time! I think it should be a permanent addition to the studios’ tour too! I hope you enjoyed this behind the curtain look of Walt Disney’s office!

Celebrate the 65th Anniversary of Peter Pan, available on Digital today and Blu-ray 6/5. 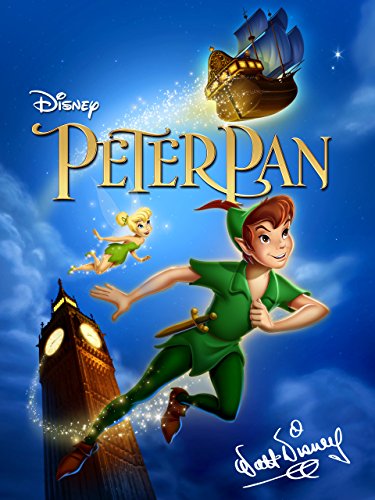