Grab your copy of Guardians of the Galaxy Vol 2, available today at stores everywhere! The blockbuster sequel featuring the world’s favorite band of intergalactic misfits is the studios first in-home title to release in stunning 4K Ultra HD format! 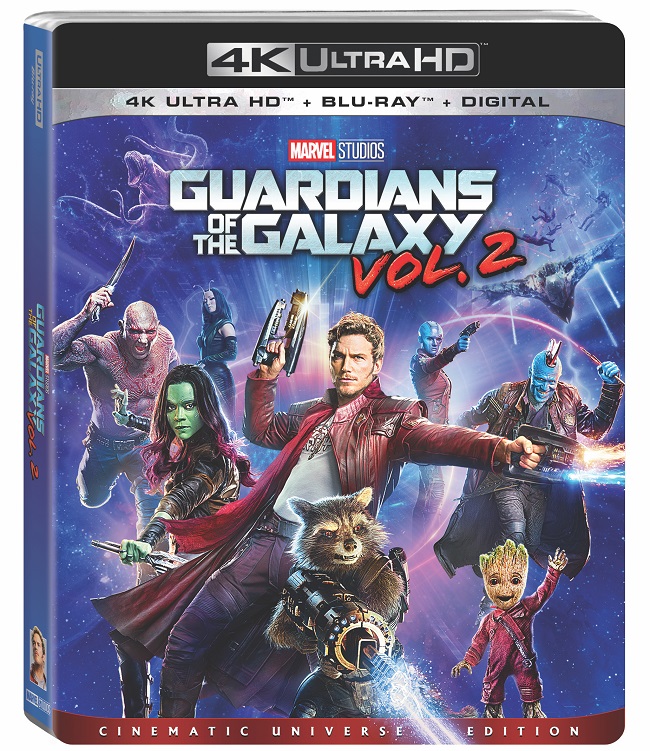 More about Guardians of the Galaxy Vol 2

Set to the all-new sonic backdrop of Awesome Mixtape #2, the film’s storyline continues the team’s adventures as they traverse the outer reaches of the cosmos. The Guardians (Chris Pratt as Peter Quill/Star-Lord, Zoe Saldana as Gamora, Dave Bautista as Drax, Vin Diesel as the voice of Groot, and Bradley Cooper as Rocket) must fight to keep their newfound family together as they unravel the mystery of Peter Quill’s true parentage. Old foes become new allies and fan-favorite characters from the classic comics will come to our heroes’ aid as the Marvel Cinematic Universe continues to expand.

See my full review of the film here.

All the features listed above plus four extra exclusives:

See a trailer of the film below:

And an additional behind the scenes trailer of directing Chris Pratt:

I recently had the opportunity to interview the girls of the galaxy, Mantis and Nebula. Check out that exclusive interview here.

Want more Guardians of the Galaxy Vol 2? Grab these movie favorites below!

Guardians of the Galaxy Vol. 2 [Blu-ray]