The Disney saga continues with its third installment of Descendants! The Disney Channel’s Descendants 3 is officially on DVD. When I was in LA for the original Descendants film screening – I was blown away and knew this would be a huge hit series for Disney Channel. The kids absolutely love the series and I do too! Hear more about Descendants 3 and pick up your copy today! Mal, Evie, Carlos and Jay (also known as the villain kids or VKs) — return to the Isle of the Lost to recruit a new batch of villainous offspring to join them at Auradon Prep. When a barrier breach jeopardizes the safety of Auradon during their departure off the Isle, Mal resolves to permanently close the barrier, fearing that nemeses Uma and Hades will wreak vengeance on the kingdom. Despite her decision, an unfathomable dark force threatens the people of Auradon, and it’s up to Mal and the VKs to save everyone in their most epic battle yet.

We can’t talk about Descendants without speaking about Cameron Boyce’s recent tragic passing. Cameron, also known for his work on Disney’s Jessie and Bunk’d tv series, was such a kind spirit. I had the opportunity to interview him for another tv series, Gamer’s Guide to Pretty Much Everything, a few years ago and he was outgoing, kind, and funny. My boys were definitely heartbroken to hear the news. It was bittersweet to see Cameron living his best life in Descendants 3.

So what did we think of Descendants 3?

The boys and I loved it! As anticipated, the music and dance scenes were fun-spirited and kept you entertained throughout. It was a great ending to the family-friendly trilogy!

Grab your copy in stores or at Amazon.com now! 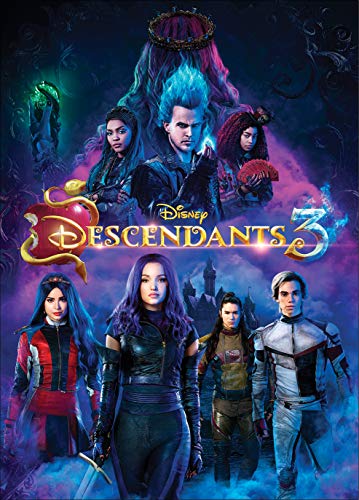