Disney’s The Pirate Fairy released on Blu-ray Combo Pack last week. This adorable film shares Tinker Bell’s latest adventure and the connection The Pirate Fairy has to Peter Pan . It’s a great family friendly movie that not only capture the hearts of little girls, but boys too!

About The Pirate Fairy:

“From the world of “Peter Pan” comes “The Pirate Fairy,” a swashbuckling new adventure about Zarina, a smart and ambitious dust-keeper fairy who’s captivated by Blue Pixie Dust and its endless possibilities. When Zarina’s wild ideas get her into trouble, she flees Pixie Hollow and joins forces with the scheming pirates of Skull Rock, who make her captain of their ship. Tinker Bell and her friends must embark on an epic adventure to find Zarina, and together they go sword-to-sword with the band of pirates led by a cabin boy named James, who’ll soon be known as Captain Hook himself.”

Check out this fun infographic detailing how Peter Pan and The Pirate Fairy are related:

Want to know where Tic Toc Croc gets his name? Check out this cute preview:

is available in stores nationwide and currently on sale at amazon.com for just $19.96. Regular price for the Blu-ray version is $36.99.

Lastly, get the kids excited for the movie with these The Pirate Fairy coloring pages and puzzlers! 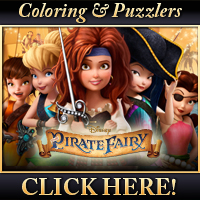